We just added three of the most powerful ‘hot market finder’ tools we’ve ever created!

You can now  target the best counties, zip codes and NEIGHBORHOODS in a single click!

and the Dashboard view...

2) How to use the COUNTY Rankings tools

By default, the page loads with a ranked list of ALL the county markets within all the individual Cities and States you’ve subscribed to.  (This view is for the entire U.S.) 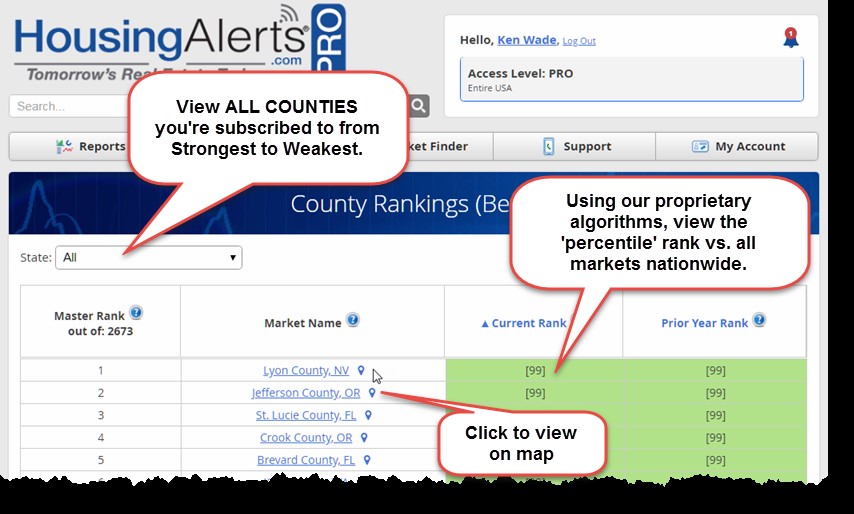 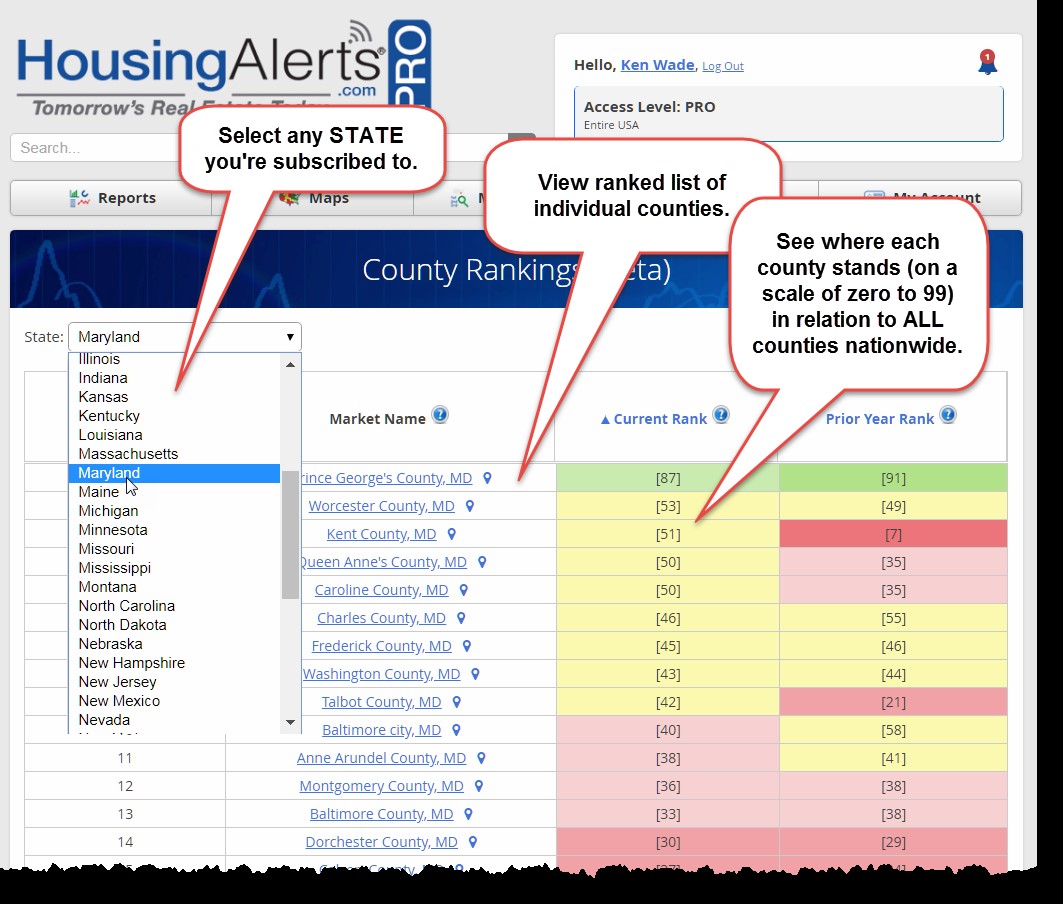 Using the Maryland example above, it’s easy to see this state (in general) was looking relatively weak at the time of this screenshot… it only had one high performing county (note the GREEN shading).

After the first ‘green’ county, the next 8 are yellow (with scores ranging from the 42nd to the 53rd percentile when compared to ALL counties nationwide).

Out of Maryland’s 24 counties, more than half were in the bottom 40% of all U.S. counties (note the RED shading). 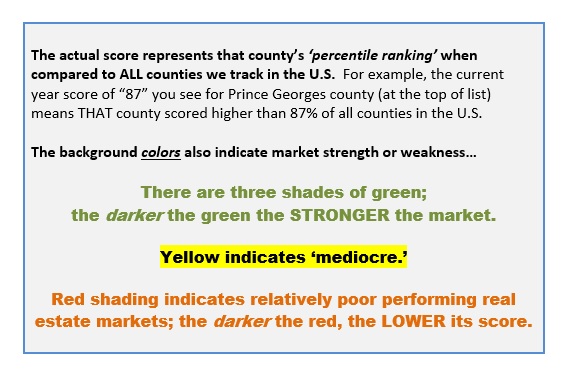 The page loads displaying the score and ranking for ALL zip codes in ALL the Cities and States you’ve subscribed to.   We track and analyze all zips codes that had enough home sale transactions in a year to produce valid results.   (There are 16,754 zip codes in the current year database.) 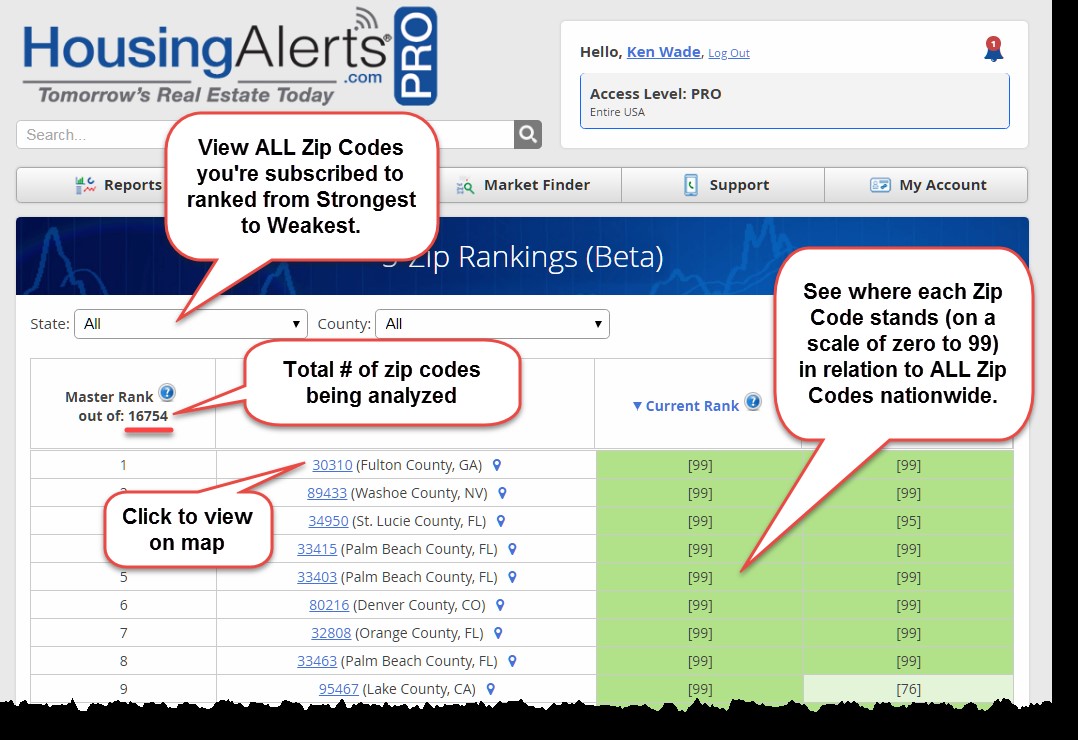 Although zip code 30310 in Fulton County, GA was ranked as #1 at the time this was made,  ANY zip code with a score above 90% is a ‘top’ micro market.  (Don’t think in terms of there being only one or a few ‘best’ micro markets.)

Any market with GREEN shading is a relatively strong market when compared to the entire U.S. The  darkest green shading is reserved for the top 9% and includes over 1,500 individual zip codes!

In fact, you should NOT use these micro market tools as a stand-alone indicator.  You should first determine the best CITY-level  market and only THEN drill down to find the best sub-markets or ‘pockets’ within that city to target your mailers, marketing and acquisition campaigns.

Micro markets are not markets unto themselves. They’re sub-markets that tend to follow what’s happening at the CITY or metropolitan level in the sense of:  “a rising tide lifts all boats.”

Of course there are stronger pockets WITHIN a metro area you should focus on, and weaker pockets you should avoid.  That’s exactly what these micro market tools are designed to help you do, in a few clicks. 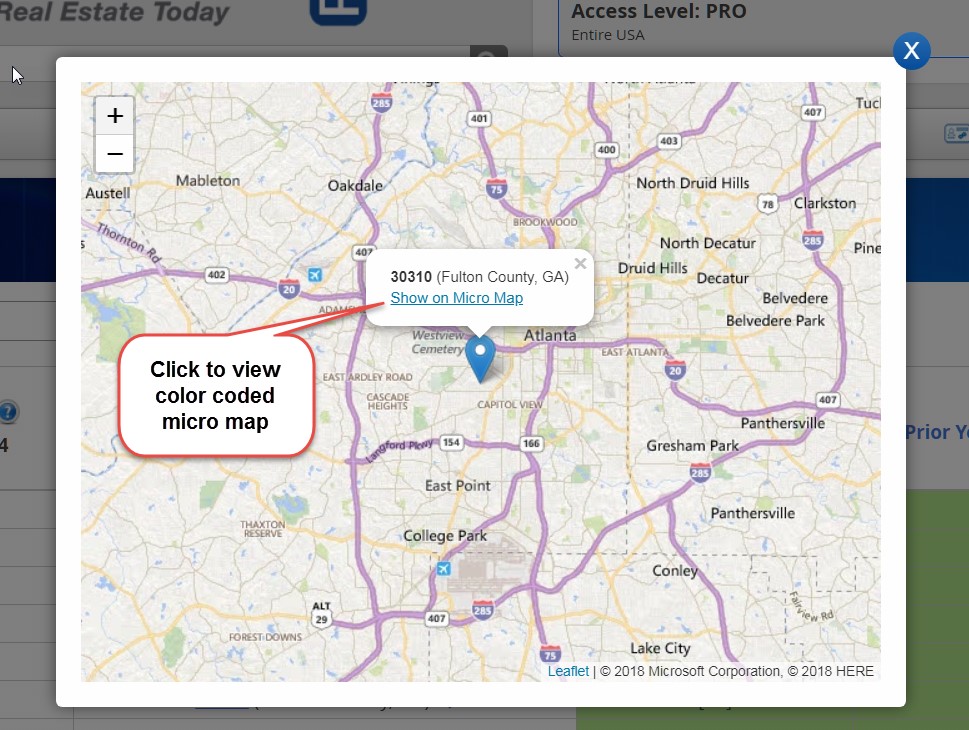 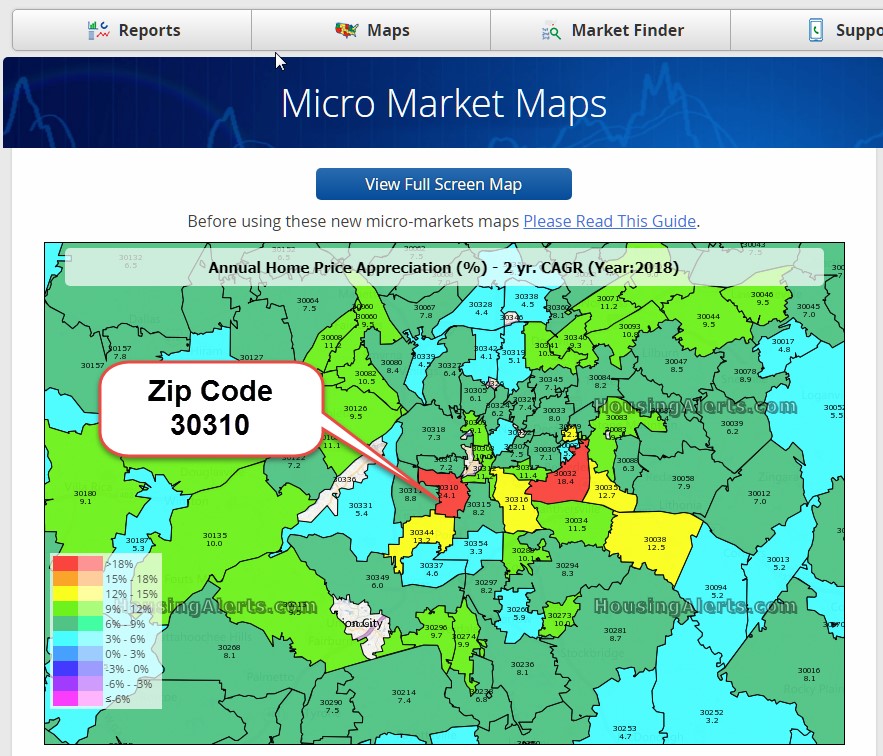 Zip code 30310 is in Fulton County, GA which is in the Atlanta metro area.  Note how  there are only a few “red hot” zip codes (in red, orange or yellow). This is a prime example of why it’s critical to pick your sub-markets carefully!

The next step would be to look INSIDE zip code 30310 (and the other red hot zip codes you see here on the map) to find the hottest NEIGHBORHOODS. 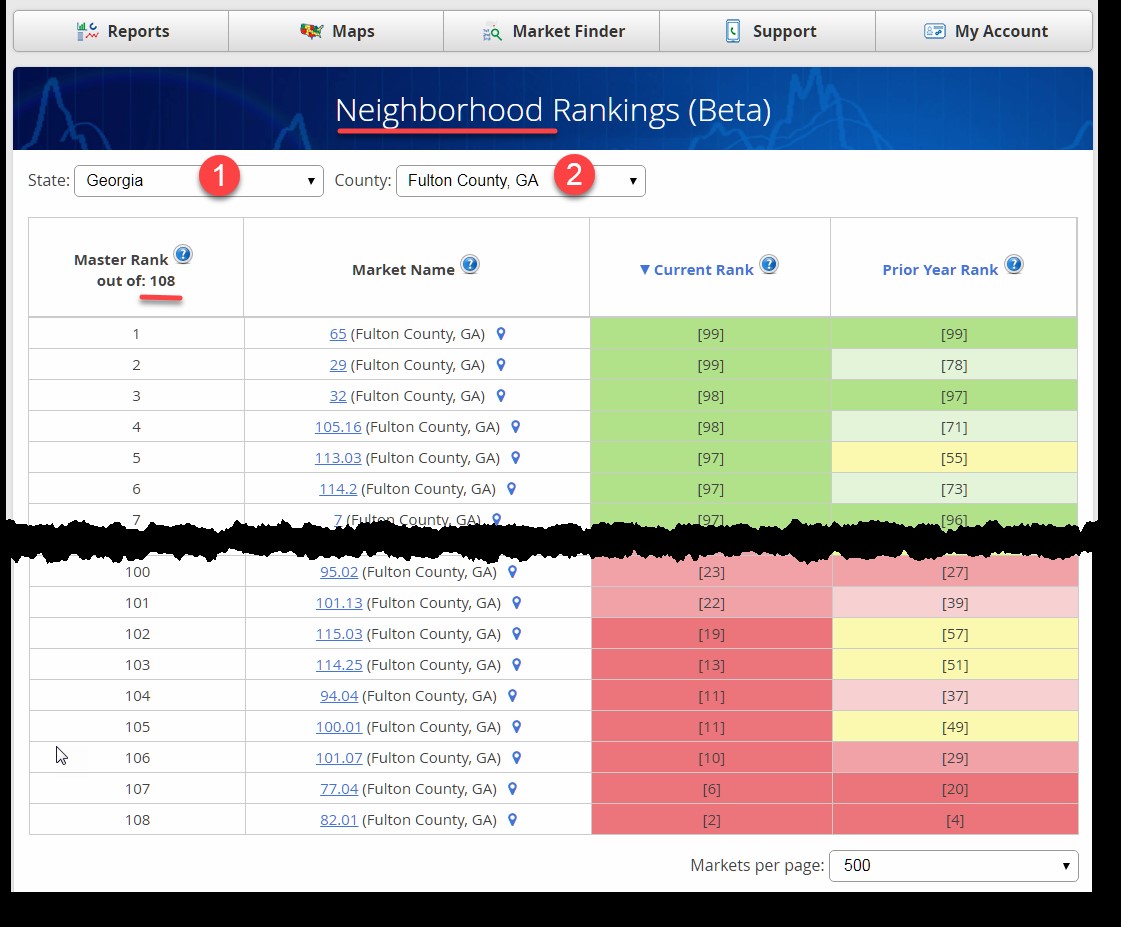 I wouldn’t want to waste the cost of a stamp to mail into some of these weak areas, especially if I were looking to buy and hold.

But even for Wholesalers and Flippers, you want to invest in high demand areas with lots of appreciation and vibrant investment activity.

Why spend your limited time fishing in weak, dead or declining markets when you can (now) just as easily target the vibrant, hot markets?

Can you see the power of now being able to GEO-TARGET all of your acquisition efforts?

Let’s take a look INSIDE a weak statewide market, at the zip code level … Connecticut… 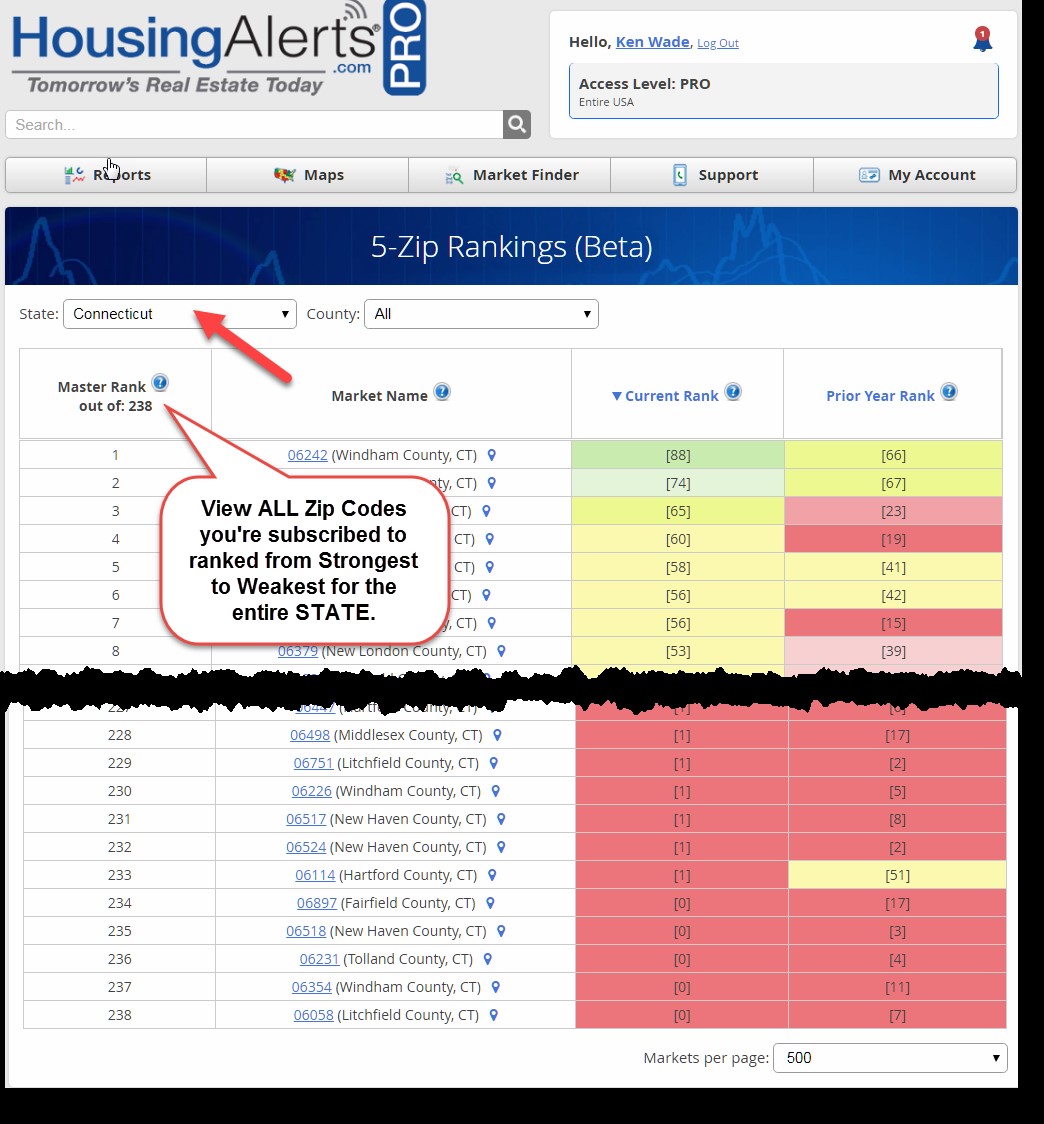 With only a quick 30-second scan of this page, it’s pretty evident Connecticut as a whole is very weak statewide (relative to all the other markets in the U.S.).

This is consistent with the  “Rising tide lifts all boats” idea, but in reverse. A crummy statewide market will be dominated by crummy sub-markets, as you’d expect.

The same goes for city-level markets. Individual sub-markets (counties, zips & neighborhoods) are most likely to follow what’s happening at the city level.

You should be suspect of micro markets that seem to be performing opposite of what its overall citywide market is doing.   Sometimes you can find that needle in a haystack micro market that’s red hot in an otherwise weak city market, but it’s not a high probability place to invest your time and money.

More typical is that outlier micro markets eventually can’t sustain going against the local tide for extended periods and ultimately tend to perform more or less in line with its parent (CITY) market.

As a Wholesaler or Flipper, you may still want to pursue TRANSACTIONAL deals in ‘weak’ states or cities even though the prospect of long term wealth from Leveraged Appreciation is not  currently looking very likely or viable.

The next step would be to look INSIDE the top ranked zip codes and counties, using the “County” drop down feature …

4) How to use the NEIGHBORHOOD Rankings

Here is a list of the top ranked NEIGHBORHOODS across the U.S. … 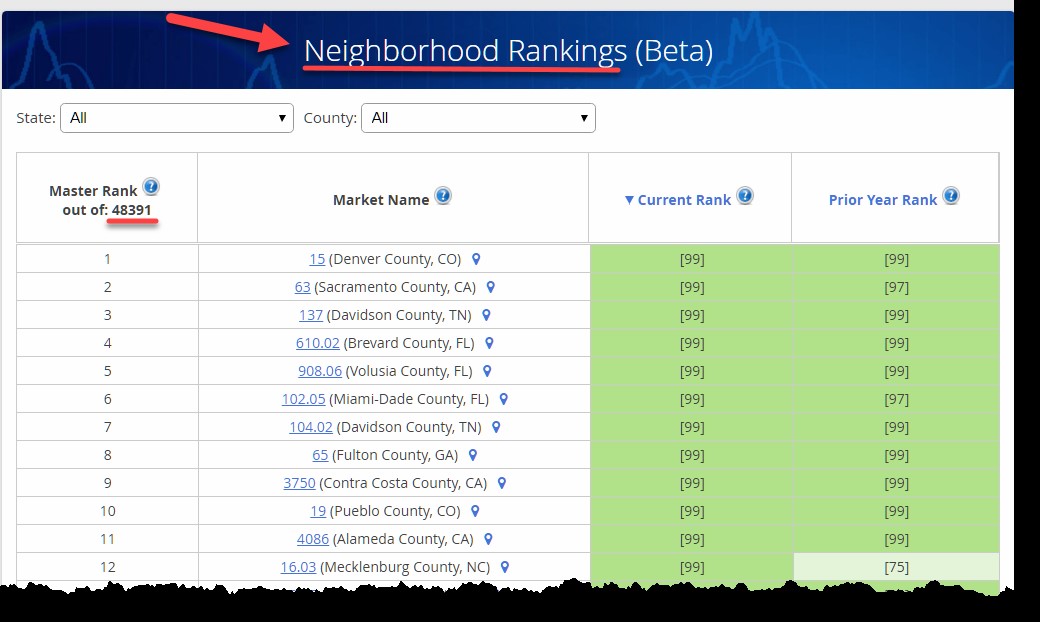 Remember the caution earlier about NOT getting overly focused on the ‘top 1’ or ‘top 10’ micro markets;  there are 483 NEIGHBORHOOD markets that fall in the TOP 1% of all neighborhoods nationwide, and over  4,300 that fall in the top 9% nationwide (i.e. - shaded in the darkest green).

Statistically speaking, don’t pick a neighborhood to target for mailers, marketing or acquisitions simply because it’s in the 99th percentile over one in the 98th or even the 95th percentile.  They are all top performing neighborhoods!  Instead, look at the parent (CITY level) market and other factors in choosing between them.

The easiest way to select a strong CITY market is to pick one of the darkest green macro markets in our Hot Market Finder (HMF) tool and then drill down into hot counties, zip codes and neighborhoods using these new tools. 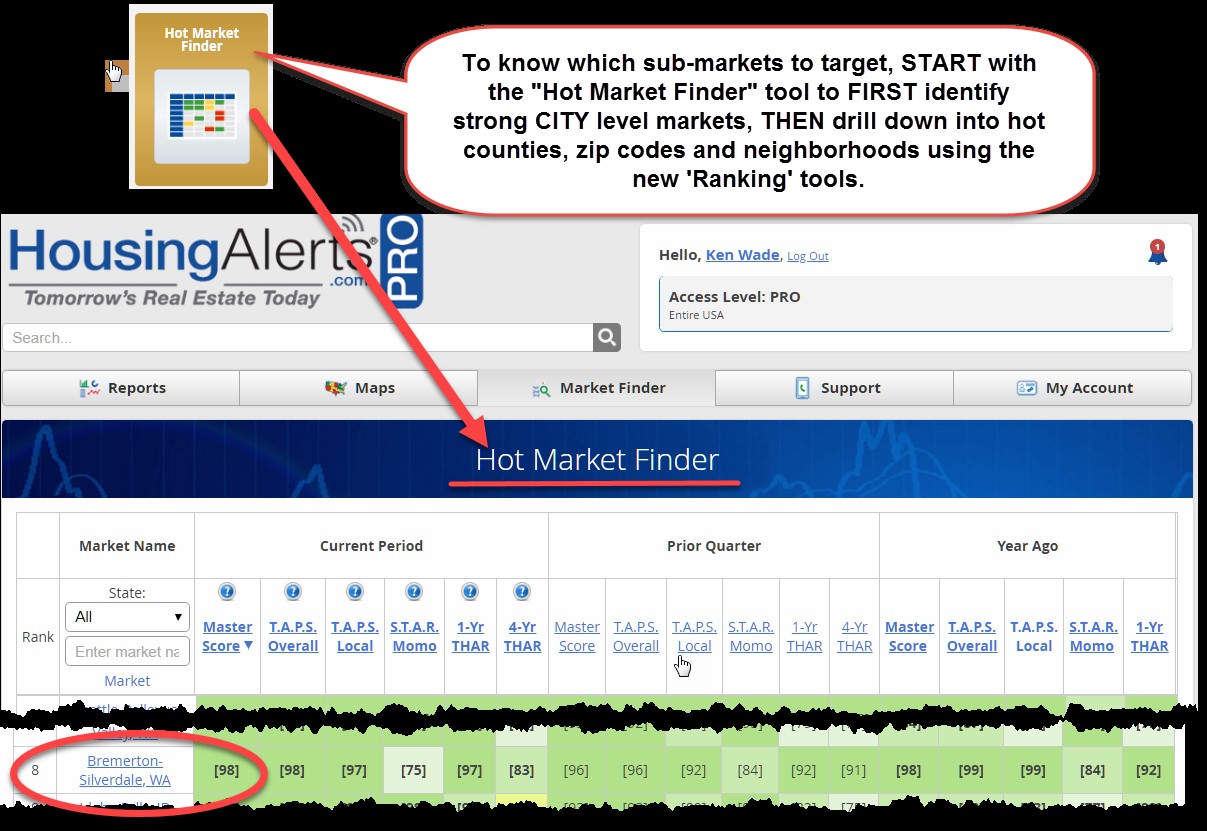 For this example we’ll use the Hot Market Finder tool for CITIES to select the Bremerton-Silverdale, WA metro area; it ranked 8th (out of the 404 largest U.S. markets).

Whether we’re Wholesaling, Rehabbing/Flipping or buying for Leveraged Appreciation,  we only want to be in the best, hottest, fastest appreciating, and most active neighborhoods.

To save thousands of dollars in marketing costs and countless hours of wasted time ‘farming’ inferior neighborhoods, we’ll look INSIDE the Bremerton-Silverdale market for the hottest neighborhoods.

Here’s how you do that in less than 30 seconds!

Go to the Neighborhood Ranking tool.

Select the state of “Washington” and “Kitsap County” in the drop down menu.

Voilà -  You’re now looking at the 51 NEIGHBORHOODS inside the  Bremerton-Silverdale metro market, ranked from HOTTEST to weakest! 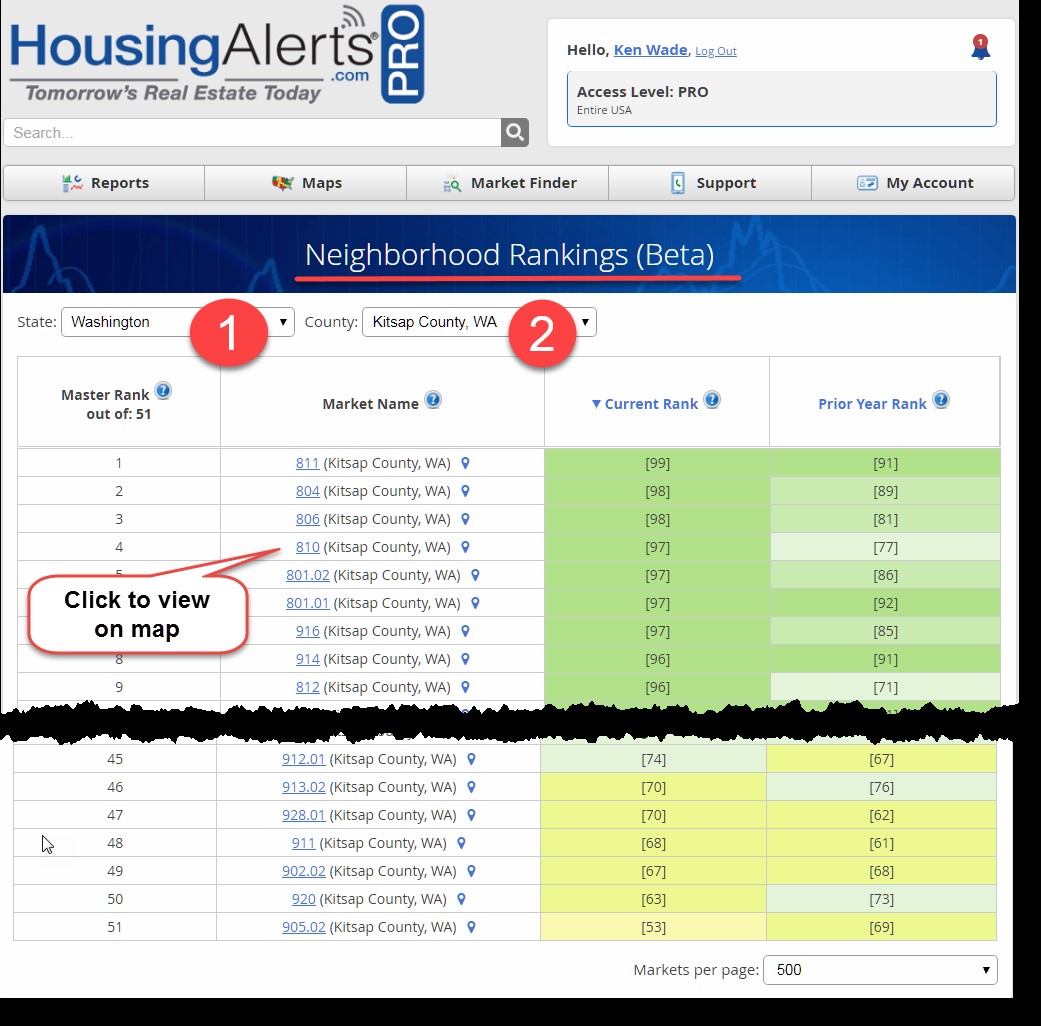 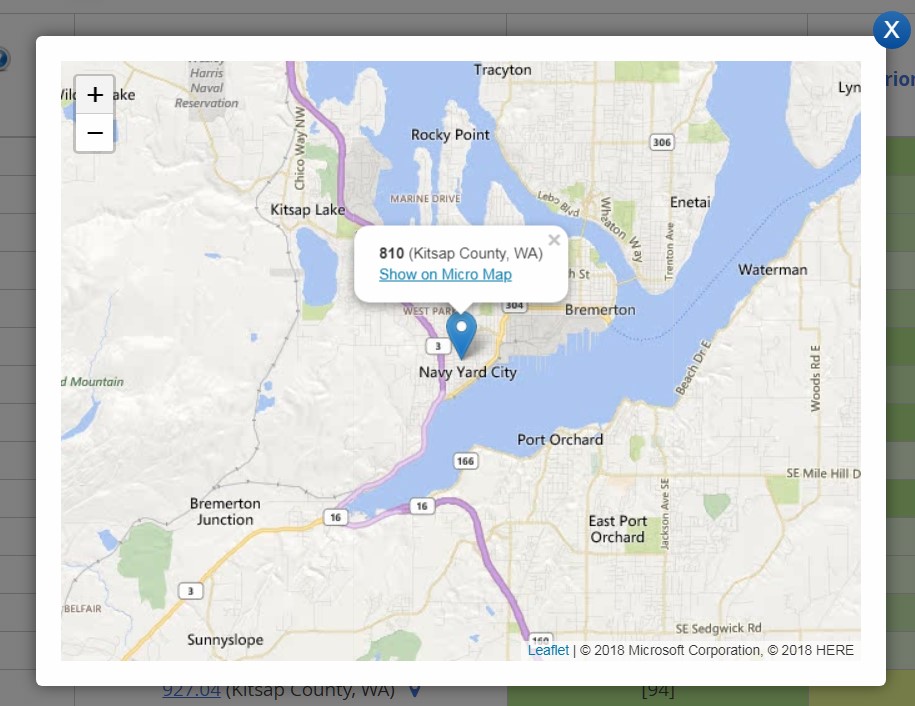 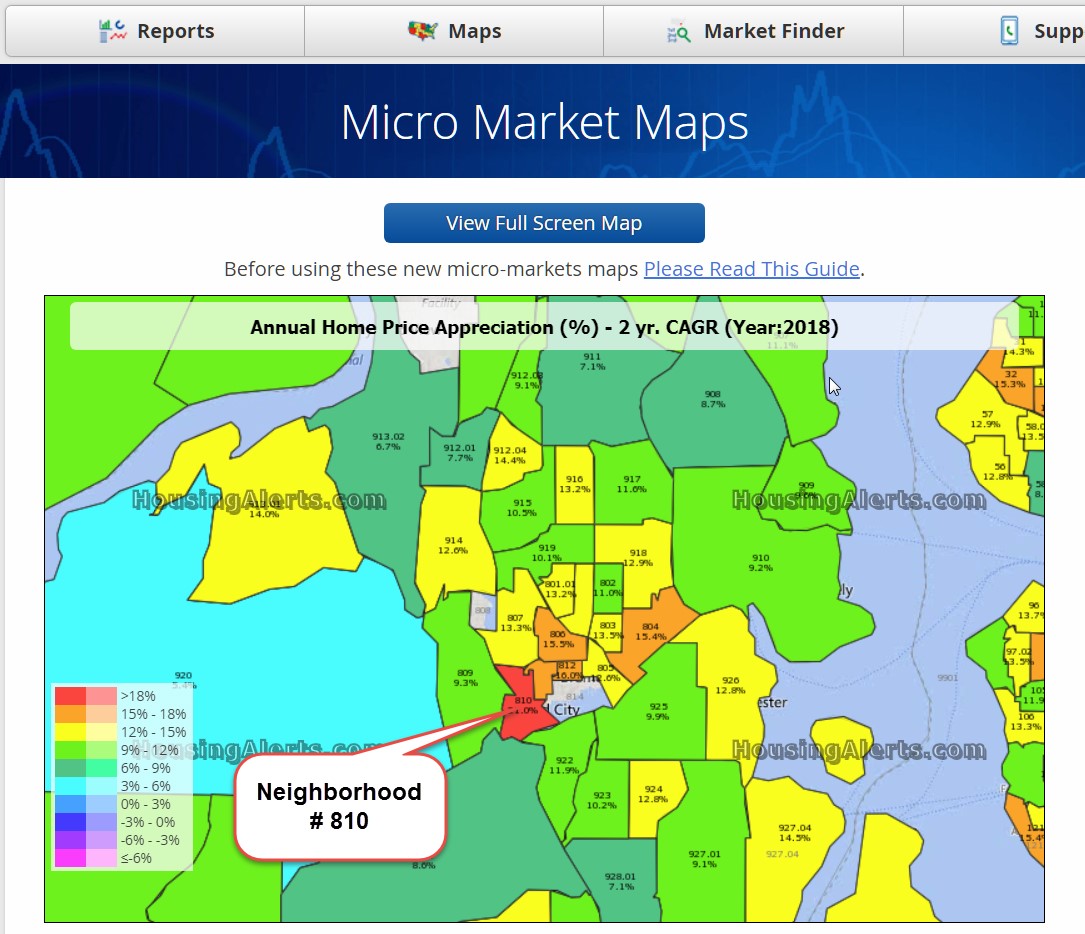 Most small wholesalers and flippers who are actually doing deals spend anywhere from $4,000 - $10,000 a month in direct mail, paid internet traffic, bandit signs, and other lead generation and marketing activities that costs a ton in terms of dollars or time – and usually BOTH.

On top of their variable expenses (printing, postage, Pay Per Click, etc) they also invest big money upfront, usually on a ‘per zip code’ basis buying expensive lists. The high-end list sellers use credit bureau type of data mining in an attempt to target homeowners who show characteristics of financial distress or other ‘motivated seller’ indicators.

…and they’re worth it if it can increase your response rate from 1.5% to 2% and/or save from mailing to people who aren’t motivated to sell.

...and in my opinion, the majority of that cost is a TOTAL WASTE OF TIME and MONEY because you’re mailing into micro-markets you should be avoiding, and NOT doing multiple mailers into markets you SHOULD be focusing on.

For a teeny, tiny fraction of a single mailer’s postage cost, you can now drill down INSIDE an entire metro market to know exactly which zip code or county or even WHICH NEIGHBORHOOD to specifically target.

You can also do it for the entire country!

Knowing WHERE to target is infinitely more valuable than knowing WHO to target.
…and can save you 80% or more on your lead gen time and expense. 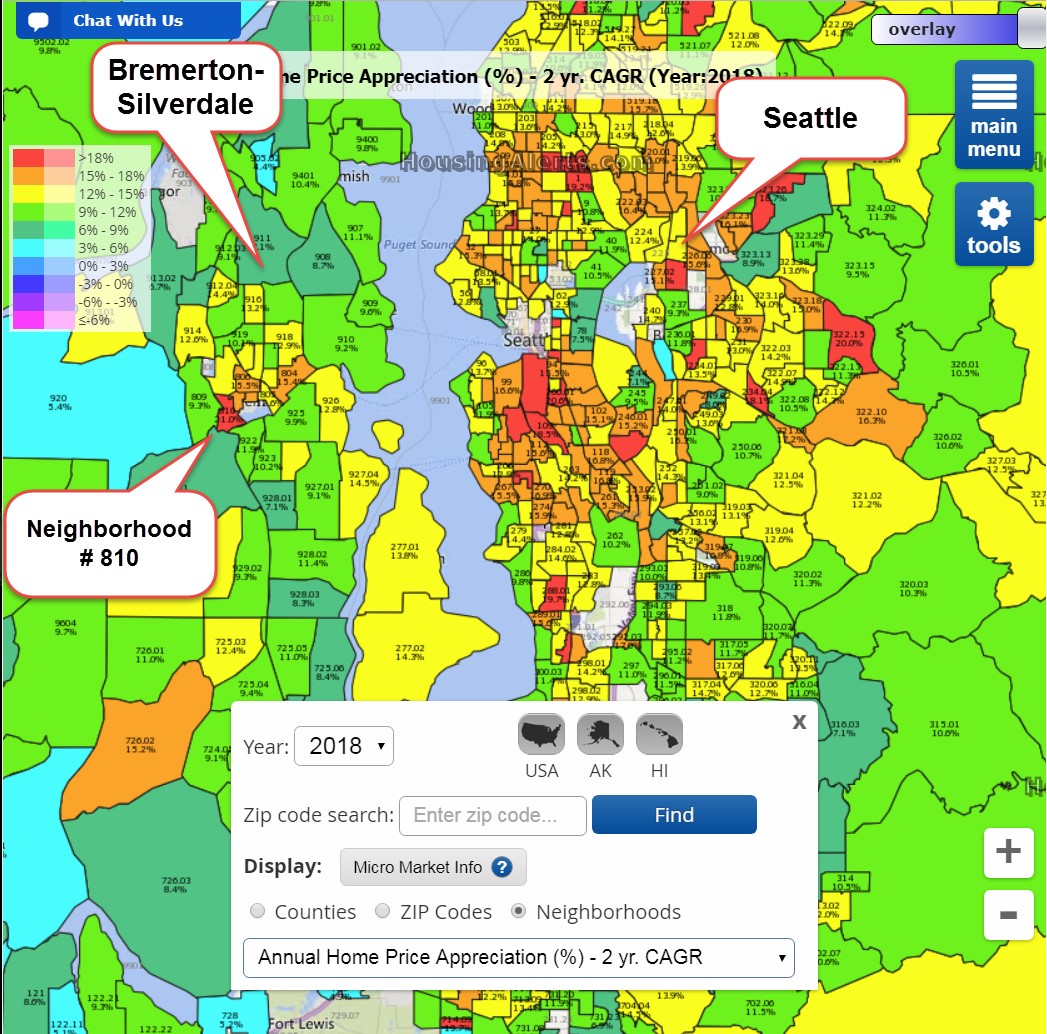 Even in some of the hottest metro markets in the country, like Bremerton-Silverdale and Seattle, you can see how some neighborhoods outperform others.
If you’re going to invest in real estate, or spend significant effort and cash acquiring and ‘working’ motivated seller leads, why not do it in the micro markets where you’ll earn the highest ROI, with less cost, risk and effort?